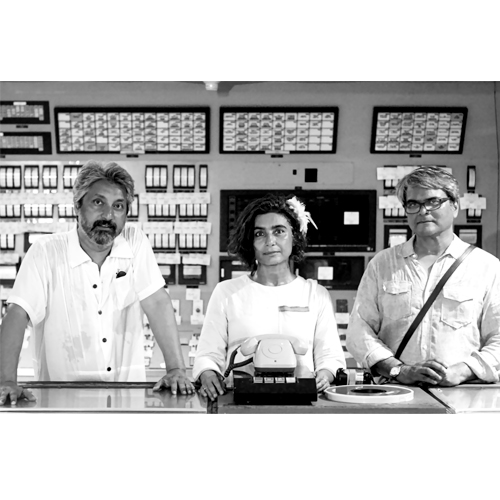 Monica Narula, Shuddhabrata Sengupta, and Jeebesh Bagchi formed Raqs Media Collective in 1992, after they passed out of the AJK Mass Communication and Research Center, Jamia Milia University in Delhi while working together on their first, now lost, 16mm film, Half the Night Left, and the Universe to Comprehend.

Raqs Media Collective follows its self-declared imperative of ‘kinetic contemplation’ to produce a trajectory that is restless in its forms and exacting in its procedures. Raqs articulates an intimately lived relationship with time in all its tenses through anticipation, conjecture, entanglement and excavation. Conjuring figures of cognitive and sensory acuteness, Raqs’ work reconfigures perceptional fields and demands that everyone looks at what they take for granted, anew.

Raqs has exhibited widely, including at Documenta, the Venice, Istanbul, Taipei, Liverpool, Shanghai, Sydney and Sao Paulo Biennales. Recent solo exhibitions (and projects) include – Pamphilos at Fast Forward Festival 6, Athens (2019); Still More World at Arab Museum of Modern Art, Doha (2019); Twilight Language at Manchester Art Gallery (2017-2018); Everything Else is Ordinary at K21 Museum for 21st Century Art, Dusseldorf (2018); If It’s Possible, It’s Possible, MUAC, Mexico City (2015) and Untimely Calendar at the National Gallery of Modern Art, Delhi (2014-2015). Exhibitions curated by Raqs include In The Open or in Stealth (MACBA, Barcelona 2018 - 2019); Why Not Ask Again (Shanghai Biennale 2016-2017); INSERT2014 (New Delhi, 2014) and The Rest of Now & Scenarios (Manifesta 7, Bolzano, 2008). They are the artistic directors of the forthcoming Yokohama Triennale (2020).

Raqs continue to be anchored in Delhi, persistently welding a sharp, edgily contemporary sense of what it means to lay claim to the world from the streets of that city. At the same time, Raqs articulates an intimately lived relationship with myths and histories of diverse provenances. Raqs sees its work as opening out the possibility of a conversation that embodies a deep ambivalence towards modernity and a quiet but consistent critique of the operations of power and property.