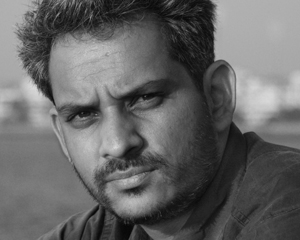 Chirodeep started his career in journalism as a trainee reporter. His next job was as a photographer with the Sunday Observer group in Bombay. Since then he has been on the photography team of The Outlook Group, traveljini.com and the international arts and culture magazine, Timeout, with whom was employed as the picture-editor managing their India editions. Presently he is working as the Editor of Photography for National Geographic Traveller (India). His work has been featured in publications across India and in books like Fort Walks, Anchoring a City Line, Bombay, MeriJaan and the seminal Bombay: The Cities Within. More recently he worked as the picture editor on the book Bombay Then, Mumbai Now. His series Commuters, which was a photographic dossier of the local train life in Mumbai, was exhibited at the Chhatrapati Shivaji Maharaj Vastu Sangrahalaya in 2012.His latest book A Village in Bengal is a record of his ancestral village in West Bengal's Burdwan district and also of his family and the Durga Puja that has been celebrated for more than a century at their home. Chirodeep is a member of the artists collective APT (Mumbai) and his work is part of the collection of the Museum of Photographic Arts (Houston, USA), the Kiyosato Museum of Photographic Arts (Japan) and the Peabody Essex Museum (USA) and many private collections in India. His works have been exhibited widely in India.