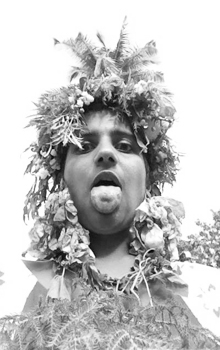 Tejal Shah (b.1979, Bhilai, India; currently lives in Goa, India) graduated with a BA in photography from RMIT, Melbourne and spent a year as an exchange student at The Art Institute of Chicago and another summer trying to get an MFA from Bard College. Her practice incorporates video, photography, performance and installation and focuses on “the inappropriate/d other” – one whom you cannot appropriate and one who is inappropriate. Que(e)rying everything, she creates alter-curious worlds riddled with fact, fiction, poetry and mythology, compelling us to re-engage with propositions on the complex relationships between interspecies, ecology, gender, sexuality and consciousness. Currently, she thinks of herself as some kind of artist working on some kind of nature! In works such as Chingari Chumma (2000), Trans- (2004-5) and Women Like Us (2010), she focuses on the social and biological constructs of gender. I Love My India (2003), filmed at a public recreational space in Bombay questions India’s democracy in the candid, apathetic, ignorant or informed interviewed responses to the communal riots in Gujarat in 2002. Her work both references and transcends otherness in “What are You?” (2006), highlighting the complexities of the highly marginalized Hijra (eunuch) community and proposes an egalitarian, poly-gendered society. Between the Waves (2012), a 5-channel video installation marks a turning point towards queer ecology in Shah’s practice. It tells the viewers a grand narrative, figuratively and metaphorically, as if she has created a new story of the origin of species that has been forgotten for a long time, or has been found from the distant future, something that seems out of place everywhere.